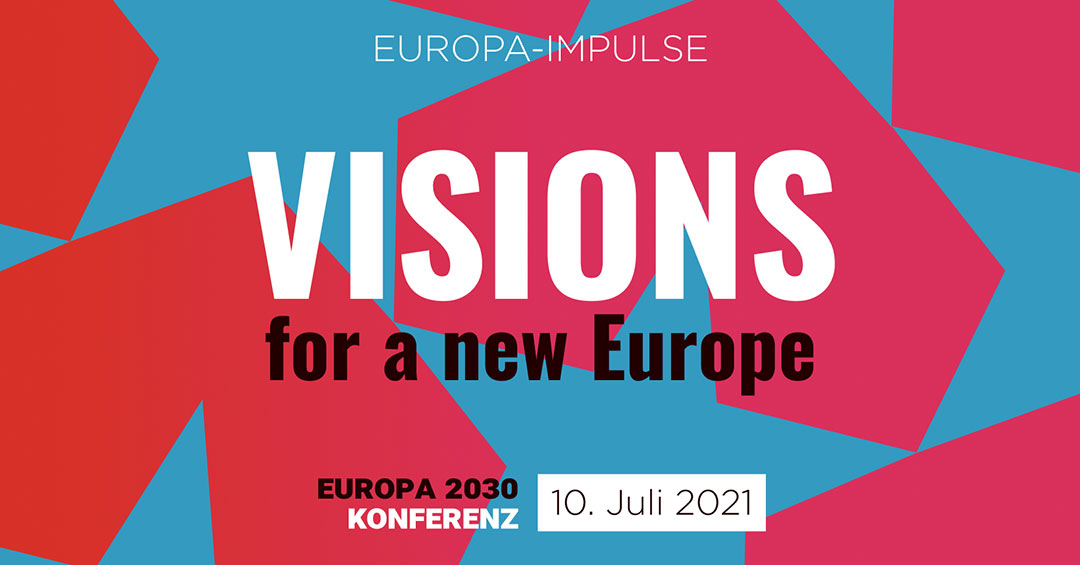 On 10 July 2021, the conference  „Europe 2030 – Perspectives for the Future of Europe – Visions for a New Europe“ took place at the European Academy Berlin.

The perspectives for the future of Europe and the visions for a new Europe were close to the hearts of all participants. You could feel it in the passion and deep concern they all showed during the discussions.

It was a meeting of convinced Europeans. However, the path towards solving the problems the world is facing and how Europe be part of this solution was not the same for all.

The conference took place within the framework of WEA‘s project:

„Perspectives for a European Identity“,

funded by the Federal Agency for Civic Education.

A global pandemic is keeping us on our toes. At the same time, we are confronted with other major challenges such as the climate crisis and growing right wing populism. The world is changing – and Europe must find its new role.

The basis of our discussion was the UN resolution „Transforming our world: the 2030 Agenda for Sustainable Development“, which addresses the reality and necessity of a global transformation process. All over the world, the way in which people work and live together as a society is changing. A conference asking for a new European perspective must put this transformation as a Just Transition process at the centre.

The conference tackled both the necessary changes as well as confirming the constants that must at all time be preserved and protected. Three keynote speeches and six panel discussions explored the issues of our conference in greater depth. Speakers came from the EP, political parties and think tanks, trade-unions as well as many non-governmental grassroot organisations.

Elizaveta Khan from the „Integration House“ in Cologne (ihause.org), recalled Hannah Arendt’s question: Is there a right to have rights? Is it reasonable that we deny others the same rights that we claim for ourselves? Can it be possible, that voluntary associations or activists have to stand up for the safeguarding of human rights because the community of states of Europe cannot or will not do so? Can Europe face up to its responsibility for the past, ask for apologies and return stolen goods, th us opening up the possibility for a conversation where some do not have to own and others do not have to ask? Can the decision makers remember that there is always plenty of money to bail out banks, so why not refugees? Can all of us who elect them live with the thought of not having done anything?

Katharina Barley, Vice-President of the European Parliament, gave a thoughtful reminder of how hard the peoples of the so-called political West had to work for their democracies over centuries. „We see in several states of the European Union the emergence of parties that want a democratic roll-back,“ Barley warned, mentioning actions against rights of the LGBTQI movement, women and all forms of diversity. „We need to fight these ultra-conservative concerted forces through a common action and with a very different awareness than we have so far (…). These attitudes are contagious and will rot the European Union from within if we do not oppose them united.“ Enhanced information is needed here and increased political education for many different target groups, Barley said.

However, the participants also agreed that in view of the challenges outlined, it is essential to find a narrative that emphasises hope and not fear. Fear drives people into the clutches of the seducers from the right-wing fringe; hope lets them work creatively to shape the future. „The militant and radical stand is important, civil movement is important, but one must not lose contact with the majority society,“ Klaus-Jürgen Scherer, politologist, author and editor, reminded.

„First of all, transformation can only succeed if you have a positive vision for a better future. (…) Because political disputes are always embedded in social struggles for social hegemony, many people perceive moral teachings as a disrespect of their lifestyle, and the prohibitions that are enforced as paternalism. In a free democracy, however, these individuals have the right to say ‚No, I don’t want to‘!“ said Marc Saxer (Friedrich Ebert Foundation).

In the panel on climate change, an attempt was made to outline this vision as socially and ecologically sustainable, resilient, humane and inclusive, a Just Transition. Noteworthy in this regard were the words of Johannes Enzmann, Speaker of the Working Group “Climate Crisis and Social Democracy” of the SPD Brussels: „Show the rest of the world, and especially the USA and China, that Europe is leading the way. The past has shown that when Europe leads the way, the others follow suit: without the European Green Deal and its net-zero target, China would not have committed to CO2 neutrality by 2060, and 137 countries would not be striving for climate neutrality by the middle of the century. Even if this is still not enough overall, it underlines the crucial and central role that the EU plays for the future of humanity.“

But there was also the voice of René Cuperus, researcher at Clingendael International Institute, who saw the possibilities of a profound change in the cooperation of the EU member states rather pragmatically: „The EU is not a substitute nation and also not a substitute religion. We [the Dutch] see Europe realistically. We love the single market and freedom of movement in Europe but not so much labour migration, because that can undermine our welfare state.“

Exploitation of workers in the creation of new fields of work, such as in the platform economy, on the other hand, need to be addressed immediately by policy makers on all levels. People who are threatened with unemployment due to economic transformation must be given the opportunity to help shape their professional future and not simply be „taken by the hand“, was an opinion on the panel of „Prosperity without work?“.

Accepting that there will always be „winners and losers“ in the digital economy also means to judge the existence of some people as irrelevant. We need to also anticipate that some people will not find their place in this digital world of work, and hence we must foresee and provide spaces and meaningful tasks for all of them and define work in a broader and more personal, individual way.

In summary, the prospects for Europe’s future are embedded in Europe’s contribution and Europe’s active participation in this transformation. This means accepting and promoting the change through scientific, technological and economic progress and innovation. At the same time, however, it also demands to uphold principles that must never be changed: respect for and protection of human dignity, respect and support for human rights, the rule of law and democracy.